Delays to services on the evening of the 23rd April were caused by vandals attempting to steal signalling cables in the Marks Tey area.  Such thefts have been a problem in south Essex for sometime, especially in the Southend area, but now seem to be occurring further north.
Posted by Manningtree Rail Users Association at 11:54 No comments:

Email ThisBlogThis!Share to TwitterShare to FacebookShare to Pinterest
Labels: Delays 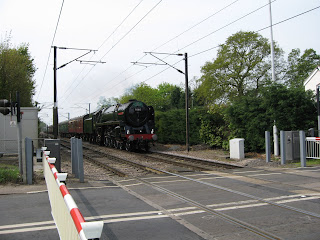 The Oliver Cromwell - the steam locomotive that hauled the last steam train in service in the UK - will be passing through Manningtree station on Thursday 23rd April.  It is timetabled to pass through Manningtree at 12:11 on its way to Norwich and then again at 18:43 on its return trip to London.
Posted by Manningtree Rail Users Association at 10:19 No comments:

Regular users of Manningtree station will have noticed that the car park extension is now complete.  Feedback thus far has been very positive with the general view being that the design is sympathetic to the surrounding area.
Campaigning for a reduction in the charge for parking will continue. 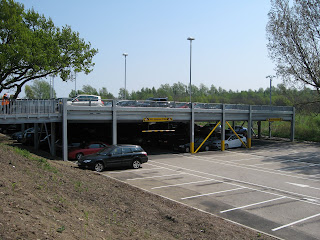 Posted by Manningtree Rail Users Association at 10:16 No comments:

Lord Adonis, the transport minister responsible for rail, is touring Britain by train this week in an attempt to see what it's really like on routes he has not used before.   On Wednesday 15th April he will travel from Brighton via Ashford International, Margate, Gillingham, Gravesend, Tilbury, Upminster, Romford and Ipswich before arriving in Norwich.
Passengers are encouraged to talk to him and let him know what they think of the service.
Posted by Manningtree Rail Users Association at 10:11 No comments:

National Express East Anglia have today announced a significant increase in seating capacity on the London - Ipswich - Clacton routes with the addition of 68 carriages. These additional trains are not new but are being brought in from the London Midland franchise and will enable more trains to be made up of twelve carriages in peak periods.  Network Rail have committed to extend station platforms that are currently too short to accommodate twelve carriages.
The trains themselves are Class 321s which are the green sliding door stock we currently have serving Manningtree.  The additional trains are due to start coming into service in late 2009.
Also announced today are new trains for the Stansted Express line which are due to be in service in 2011 in time for the Olympics.
Posted by Manningtree Rail Users Association at 12:11 No comments:

A reminder to passengers that services over the Easter period will be severely disrupted due to planned engineering work.
Replacement bus services will run between Ingatestone and Liverpool Street and also between Colchester and Clacton and Walton.
Details can be found on the NXEA website
Posted by Manningtree Rail Users Association at 10:19 No comments:

The Manningtree Rail Users Association exists to promote the interests of the passengers who use Manningtree station and the services on the Harwich branch line. Completely independent and funded entirely by voluntary contributions we cannot survive without your support. The MRUA is a founder member of the Essex Rail Users Federation.
Committee:
Chairman: Derek Monnery
Treasurer: Val Pretty
Tony Albert, Paul Leech

Useful Links (MRUA not responsible for the content of other sites)